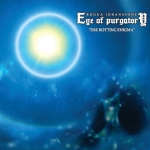 EYE OF PURGATORY is an international act playing Death Metal rooted in the Swedish tradition. Spawned by Death Metal institution Rogga Johansson (PAGANIZER, RIBSPREADER, REVOLTING, PUTREVORE, MEGASCAVENGER, JOHANSSON & SPECKMANN etc.), EYE OF PURGATORY is the new brainchild of Rogga, where he invited and gathered spirit and souls of the ancient ones through darkness infested creation “The Rotting Enigma”. The album was mixed by Ronnie Bjornstrom and everything else is handled by Rogga himself, might be in his cryptic cellar. This record beholds seven Death hymns of nefarious insanity which conjured the essence of Swedish Death Metal and formed a whirlwind of compositions where DISMEMBER seems meet NOMINON in a brooding mountainside and went together to the cryptic vault of Rogga Johansson, only to find out that Rogga is revisiting the ancient past for the quest of the rotting enigma through his eyes of purgatory. As the initiation began with the enormous ‘The Hause On The Edge Of Hell’ which spearheaded like a ribspreader and later being slowly entombed. Being ‘Sucked Trough The Void’, you will feel the screams of darkness which is nothing but a prologue to the macabre and malevolence. And that malevolence appeared as ‘Whispers From Another World’. It might be a sheer concurrence that while listening to this composition, it felt like reading the ‘The Whisperer in Darkness’ which is a Novella by H.P. Lovecraft. A mid tempo creation full of horrid and ghastly whispers where its cold tremolo picked melody will grasp your inner soul. While being grasped by its cold brutality you would be exposed into ‘A Room With A View (Of Hell)’, a certainly fitting name which will progress through relentless battering and sheer ghastly harmonies like a trip to the hell of your inner self. Who can survive the rigorous twists of this inner self hell would get access to the ‘First Door’, as if it was all envisioned like this and Rogga certainly showed us in another mould that his ingenious and insane sonic visions is limitless and might keep possessing us and them for eternity. Those who recurrently seek and explore the Swedish tradition of capturing death and dismay, should be exposed into this creation and confront the ‘The Rotting Enigma’. More information about the band you will find at www.facebook.com/eyeofpurgatory and the label at www.facebook.com/ibdc666