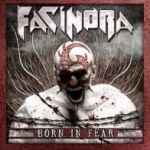 The further back you go in xxtreme Metal history, the more you’ll begin to notice that the lines between genres blur, especially between Thrash and Death Metal. FACINORA say they play Thrash Metal, but the presence of the D-beat, although a staple of the Thrash scene, is done in such a way as to suggest a Scandinavian Death Metal influence; a small one, but large enough to produce some confusion. However, there is no mistaking the Thrash on the rest of the demo. It’s refreshingly well done. Most of the young bands who play Thrash Metal do no more than cheaply reproduce garbage riffs from B-grade bands. This band aren’t as bad, but they have a long way to go before they can expect to make a dent in the world’s ears. www.myspace.com/facinorathrash