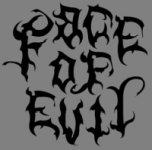 Despite their incredibly stupid statement-information I feel a fatal attraction towards this Face Of Evil. You may wonder what stupid statements, so let’s mention two. "In September 2003 Face Of Evil decided to officially declare war on the so called Metal scene" and "We’re not a part of your scene and we will never be". C’mon guys, you can’t be serious! If you weren’t a part of my scene, why don’t you kill your label which allowed me to listen to this, since I’m not a part of your scene? Let’s face it, Face Of Evil are just as much a part of the Metal scene as any other Metal bands. There are good bands, there are bad bands and there are bands with a purpose. Face Of Evil are a band with a purpose and I’ll explain you why. Personally I really like Dimmu Borgir (I guess the members of Face Of Evil now turn in their sleeping-coffin), and I think their "Death Cult Armageddon" is one of the ten best albums in the Metal scene ever. However, there’s this saying that opposite attracts. Well, I think that’s not totally the truth. But Face Of Evil is more or less the opposite to Dimmu Borgir. Where the latter includes a heavy dose of keyboards, various use of vocals, intricate melodies, symphony orchestra and sublime sounds, Face Of Evil do more or less the opposite. We get raw and brutal straight-forward vocals, no keyboards and effects, simple melodies with occasional changes and no sublimity. Surprisingly the production is level and rather strong. I say surprisingly, because you don’t expect a totally underground Metal band to have a strong production. And, as I said, Face Of Evil is musically the opposite of Dimmu Borgir but they have two things in common. For one they both do their Metal with conviction. And second, they do great songs wrapped in a strong production. Nah, don’t think that "Face Of Evil" has a major and clean sound. It’s more that their dirty and violent music demands a dirty and violent production, just as Darkthrone’s "Transylvanian Hunger" did several years ago. To me the production is strong if the band manage to make the sound fit perfectly well to the actual music. So, what kind of music does Face Of Evil actually play? To me it’s more or less Death / Thrash kinda like Kreator and Slayer did on their two first albums, though Face Of Evil do it with a little twist of their own because this doesn’t sound like neither of the two mentioned bands. I dare say that "Face Of Evil" is surely not for the trendiest out there, but if you are in the need for a half an hour + of pure Metal this is a bargain. Contact: Metalblood Music, Box 11 , 511 21 Kinna, Sweden, www.metalbloodmusic.com, info@metalbloodmusic.com