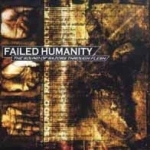 What a killer debut!!!! Never heard of FAILED HUMANITY before, but these guys finally managed to make my blood boil extremely hot once again! Just have a look at the beautiful album title and speak after me, very slowly: “The Sound Of Rrrrraaazooooors Through Flessssssshhh”!!! They certainly couldn’t have found a better description for their own deathly art than that! FAILED HUMANITY have been around since 1994 in various different line-ups by now and released two demos prior to this 9 – song full length. They have dedicated themselves to very straight forward, totally devastating old school grinding Death Metal in its most brutal form. The vocals are as guttural as you could imagine, songtitles such as ‘Darkness Descends’ (not a DARK ANGEL cover!), ‘Full Of Hate’, ‘To Die A Thousand Times’ or ‘Kicked To Death’ already give you a little hint of what to expect here and if that’s still not enough – the crushing riffing in combination with the fat production will finally blow you away. This is like early GRAVE mixed with the intensity of BOLT THROWER and brutality of acts such as INCANTATION. Yeah, I know – this comparison sucks pretty badly, but it will certainly make you curious enough to check them out, right?! And that’s what you should do right away if you consider yourself a fan of true Death fuckin’ Metal without any compromises!