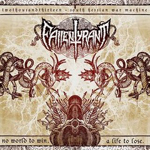 This German band was apparently formed back in 2008 as a side project by the bass player of the Doom / Stoner band WIGHT. So, taken that on consideration, one would hardly expect the kind of music this band creates. FALLEN TYRANT is a very competent Black Metal band in the fullest sense, and reminds me of the sounds EMPEROR has taken after their debut album, meaning that in that entire harsh atmosphere created, there is a very strong musicianship. In fact at times I can almost sense the Doom / Stoner aura in here giving at times an almost suicidal Black Metal sound, but then again it is BLACK SABBATH which comes to mind in some of those slower chain carrying riffs. The production values are also to be noticed, although it is well recorded, the sound has that characteristic grim sound, specially the drums, but instead of sounding like a cheap drum kit, they just sound dirty and raw, whilst played in a very competent way. The guitar solos are probably a bit, just a bit, in a different essence to the grim nature of the music, but they are so well done that works in transporting the listener form the grim landscapes to a emotional beauty to then be taken back with fury to the very depths of hell. This is Black Metal we are talking here. There are also quite a few uses of dissonant riff, thus giving a semi-technical aspect to the music. Also, there a few clean sung passages here and there, that at times also recalls for a Viking Black Metal sound. In a way, I was reminded for reasons beyond my understanding to WINDIR, although FALLEN TYRANT has a more back to the roots of early Norwegian Black Metal sound than an epic one. This comes as a pleasant surprise that evokes 1994 in terms of Black Metal sounds, yet doing it with conviction and for a chance with a quite different twist than just merely copying to death what has been done before. www.fallentyrant.com, www.facebook.com/fallen.tyrant, www.reverbnation.com/fallentyrant, http://fatandholy.blogspot.be