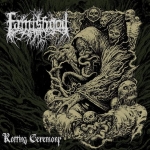 After a five year wait FAMISHGOD return with their third full length album, delivering another slab of monolithically oppressive Doom / Death. The duo, comprised of AVULSED frontman Dave Rotten on vocals and Pako Deimler on instrumentation here present 7 slow, grinding tracks that are rooted in the early 90s classics of the genre. The most obvious comparison here is DISEMBOWELMENT, and the chorus effects on the clean guitars that make appearances throughout this release are certainly reminiscent of that act, helping to create an uncanny atmosphere whenever they are introduced. The downtuned distorted guitars have a massive amount of gain, bringing the guitar tone close to some of the messier brutal Death Metal of the early 2000s and aggressive midtempo sections mean that this could appeal to fans of slower Death Metal like INCANTATION or OBITUARY as well as Doom fans. The overall feeling here is one of gloom though, with the tempo occasionally dropping to Funeral Doom levels. In contrast to their previous albums there is a surprising amount of mournful melody emerging from the murky sound, often evoking the Peaceville 3 (PARADISE LOST, MY DYING BRIDE and ANATHEMA) influenced end of the genre – this helps make the songs more dynamic, preventing the monotony occasionally found in this kind of extreme Doom and giving this release potential for much wider appeal than one might initially expect. Rotten’s extremely deep vocals will be familiar to AVULSED fans, but take on a much more ominous aura in a Doom Metal context. His performance is excellent, the slower tempo allowing him to inject much more nuance, with long slow growls that often decay into a whisper. The vocals genuinely enhance the songs, adding an element of menace to the proceedings. The production is very clear, with guitars that sound massive, and a touch of reverb to enhance the otherworldly nature of the vocals, although the drums may sound a little too digital to some ears. Overall, this is a really strong release, which should be checked out by fans of any style of Doom / Death. You can check out information about the band at www.facebook.com/famishgod and order the album from their label at www.xtreemmusic.com