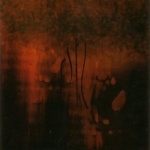 The first vital sign of FARSOT was their demo entitled “042103Freitod”, released in 2004. Although I never listened to the demo it most have been quite impressive, judging from the reviews. Three years went by, a very long time concerning the commercial aspect. But instead of releasing a premature full-length, FARSOT did take up time releasing their debut album. The result is called “IIII”, a distinguished Black Metal album. Reading the demo and album title, accordingly having song titles like ‘Thematik: Hass’, ‘Hass – Angst’, ‘Thematik: Trauer’ etc. in mind, plus musicians who call themselves “10.XIXt”, “3818.w”, “Pi:1T 5r”, “v.03/170” and “R 215k” I feared some kind of modern or avantgarde album. So modern and advantgarde, that just a few people are able to understand the deeper meaning and so on whereas for most listeners such stuff is just either boring or annoying. But fortunately “IIII” is deep rotted within the traditional Black Metal. The classical elements are very present. Desperate shrieks, deep grunts, whispering voices, aggressive, fast guitar attacks are contrasted by more calm, slow parts tipping over into hymnic moments. Needless to quote any bands, just remember what Black Metal sounded in the early 90s with all its different facets, and you will get a proper idea of the influences of FARSOT. But “IIII” is far away from just being a copycat of times being long gone. The band deconstructed the traditional Black Metal in its different elements and then formed a synthesis of these elements. The result is quite astonishing – still Black Metal, but in a very unique form. So once again a clear prove that Black Metal is still “alive”, that there are still bands out there able to play interesting music without leaving the typical elements of this genre behind. For me Black Metal has always been defined by terms like romantic and passionate, because it is able to arouse very strong feelings. Having such definition in mind, FARSOT released a very good debut. www.farsot.de.