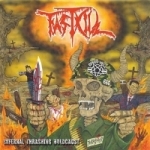 Are you a worshipper of 80s Thrash Metal? Do you bow on your knees for your faves like RAZOR, DESTRUCTION, BLOODFEAST, KREATOR, DARK ANGEL, TANKARD etc.? Will you thrash till death? If you can answer these three question with YES (like I do) then FASTKILL will be right choice for you and a nice adding to your collection. "Infernal Thrashing Holocaust" is the debut album by this five piece horde from Japan which has been thrashing around since 1996. The band was able to unleash three demos up to now ("Conflict In Hate" in 1996, "Senseless Sadistic Souls" in 1999 and "Total Thrashing Massacre" in 2001) and attacks the world-wide scene now with its first silver disc. Like the title of the album promises you will get here a lethal dose of aggressive, fast and total raging Thrash Metal, deeply rooted in the glorious 80s. Nothing more, nothing less. The CD starts with ‘Torture Inception’ which is an intro / instrumental to invoke the coming devastation. And with ‘Kill For Pleasure’ the Hell breaks loose and there will be no mercy till the album is finished. There’s no need to highlight one track as all are killers (no fillers). These kamikaze Thrashers play ultra tight and will for sure drive all Headbangers out there insane. The production of this album is a killer, very powerful and like a slap in your face. The guitars are very aggressive, totally shredding and will shave your heads. The rhythm section will give you the rest… total pounding and devastating. Singer Toshio reminds me sometimes a little bit on Gerre of Tankard (probably accidentally). Just the playing time is a little bit short but with such an entertaining release it doesn’t matter at all. The artwork rounds everything up. Cliché laden but we want it like that! To sum it up here: a real enjoying Thrash Metal album played with passion and the right spirit. So I can highly recommend it to all Thrashers out there and there will be one choice only: BUY OR DIE! Contact the band at www.fastkill.net, email: kaz_mochida@hotmail.com or the label Satanic Lust Records at kabbala@mail.goo.ne.jp.