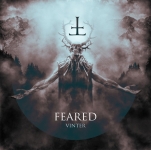 Swedish Death / Thrash Metal squad FEARED came to existence in 2007, and ever since they have released 5 albums on their own. "Vinter" is the band’s latest 11-track effort, blending elements from Death and Thrash Metal tightly together, added with some modern corish bits, which at least turned my head away quite a bit from liking this Swedish act as much I would have wanted to like them in the first place. For their advantage it must be said they do have a whole concept ready to make it big for themselves, as it’s no denying at times FEARED sound scarily close to LAMB OF GOD, although I wouldn’t be so rude to claim FEARED could be any sheer carbon-copy of their American brothers, however. On the other hand, some certain musical similarities can definitely be found between FEARED and LAMB OF GOD but gladly there’s also a strive for a bit more original and unique sound within the FEARED camp, which gives them some hope for avoiding those harshest accusations about being some 2-cent copy act only. With less of this ‘core’ ingredient involved in their sound, I certainly would have enjoyed FEARED’s "Vinter" more. This stuff isn’t that bad by any means but then again, it isn’t capable of sinking too many ships either – not yet anyway, I am afraid. For more information about this furious sounding Death / Thrash combo, can be found at: www.fearedband.com