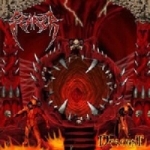 While the Bochum-, Essen-, Gelsenkirchen-area used to be THE melting pot for raw, uncompromising Thrash Metal made in Germany back in the 80s, East Frisia (with its cities Emden, Aurich, Oldenburg etc.) evolved into an equally strong (if not stronger!) Death Metal counterpart nowadays! For quite a while it seemed that ANASARCA (who recently finished the recordings to their 3rd killer full length “Dying”) would be the undisputable leaders of brutal Death Metal here, but ever since their origin there’s more and more strong new acts appearing on the map and FEARER quite obviously has become the most dangerous one to watch out for at the moment! Somehow kinda ironic, considering the fact that ANASARCA as well as FEARER both evolved out of the ashes of VOMITING CORPSES a while ago… But anyway – FEARER’s official second full length album “Descent” is without a doubt one of the strongest, if not THE strongest Death Metal outburst ever to be released in Germany! This album is so goddamn perfect in every aspect, that it left me speechless for quite a while after I had finished listening to it for the first time. And you know what? It still does, even though I have played it a couple of times by now. I honestly never really expected these guys to become THIS strong as I wasn’t too much impressed by them back in their very early days when they had just put out their “Mindloss” demo. But with each of their self-financed releases (“No Tomorrow” MCD, “No Compromise” album) they strongly matured as songwriters and musicians and “Descent” is definitely the best they could come up with at this point of time! Even though FEARER are also playing a very brutal form of US styled Death Metal, they obviously still have their musical roots in the early days of this genre. And I don’t mean this for the simple reason that they’ve come up with an incredibly strong version of MASSACRE’s ‘From Beyond’, but also because the band tries to focus a lot more on killer riffing, as opposed to blast all the way (which they do quite often nevertheless). Their previous album “Confession To Hate” (or “The Grinning Face Of Death” if you prefer its self-financed original title) was already verrrrry promising, but “Descent” blows it away without any problems. It’s got a way better production (they went from Audiocheck to the better known Sound Lodge Studio), more clever arranged songs, more overall variety, more brutality, more cool melody lines and vocals that often remind me on Kam Lee, rather than on the most copied Death Metal frontman lately, Mr. Frank Mullen. While other Death Metal acts usually combine deep frog-noise vocals with annoying Black Metal shrieks, FEARER focus on a deep and brutal Death Metal voice, combined with John Tardy like screaming and the result is just brilliant! All of the songs on “Descent” got performed on a very high musical level, yet still come across totally right into your face and therefore should easily explode in a live situation and make each crowd completely go nuts! No technical extravaganza here, just crushing all the way through! Even the coverart (once again very well done by Mr.Necromaniac, Thomas Westphal) blows away its predecessor! So, all in all this is undoubtedly an essential album for each single worshipper of pure fuckin’ Death Metal!!! Get it at any cost! Further info: www.fearer.de, www.remissionrecords.de