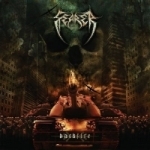 Fans of brutal Death Metal beware! The northern German Death Squad FEARER has returned with their third full length album after all and once again managed to impress with a writing quality that we’re mainly used to by American acts. “Backfire” musically continues on where its predecessor “Descent” left off back in 2003, yet offers some little changes here and there. The band still sticks to their wellknown formular of catchy and always very effective, totally crushing riffings, combined with some clever incorporated blast parts and two different vocal styles (one in the deep Kam Lee vein, while the other easily recalls John Tardy). As expected, there’s once again no weak tune to be found on the whole album and therfore it easily lives up to international standards. From the whole atmosphere and feeling “Backfire” often even reminds me on the period of time when Earache, Roadrunner and Nuclear Blast Records still used to be big competitors in terms of releasing Death Metal from the US and albums by MASSACRE, MALEVOLENT CREATION, OBITUARY, DISINCARNATE, RESURRECTION, SUFFOCATION and the likes ruled the scene. The aformentioned little changes could be found in the guitar department on one hand (the leads come across a bit more melodic this time, probably due to newly recruited six-stringer Michael Borchers, who replaced Matze Wildfang) and an even more professional sounding production on the other. Despite the obvious increase of quality, I’m personally not completely fond of those improvements as the band lost a little bit of their raw, cutting edge because of that. The harsher production on “Descent” just fitted them better in my opinion and the melodies take away a little bit of the overall brutality. But apart from that it’s still a fantastic album as a whole and an excellent offering for every fan of pure Death Metal! Release date: October 17, 2005. www.fearer.de, label site: www.remissionrecords.de.