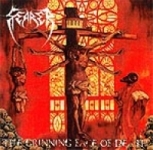 FEARER already released a demo tape back in 1996 with a somewhat weak production. On the other hand, one could already sense their potential. Five years later the East Frisians (of course) present their relatively long, well produced CD “The Grinning Face Of Death” without any fillers! Obviously they had enough time to collect material throughout those five years – if each band took five years for a new killer album like this instead if a filler album every year I’d appreciate it very much! FEARER play crushing Death Metal and what I like about this CD is that despite of all its brutality and rage it doesn’t get boring nor monotonous (remember: this one is 42 minutes long)! On stage they’re quite good as well so watch out for FEARER! Cool cover, by the way. www.fearer.de