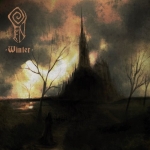 It’s more and more usual to discover bands primarily tagged as “atmospheric” or “progressive” Black Metal, where elements out of the borders of the genre, clean vocals for example, are combined with the standard Scandinavian Black Metal riffs and blast beats. Looking to best selling phenomenons like DEAFHEAVEN or WOLVES IN THE THRONE ROOM I can’t hold my repulsion for the whole front. But, I totally enjoy other Black Metal bands in the “atmospheric” mood, like ASH BORER for example. So, let’s put personal tastes aside and let’s focus on FEN with dispassion. They’re from London but they dedicated their moniker to The Fens, a region in England where they grew up. So, their main inspiration and lyrical themes come from the landscapes and the nature of that territory. As many bands that talk about nature, ecology and disgust for progress and the modern society, for example the so called Cascadian Black Metal scene, FEN neglect evil and satan, they’re surely open-mind musicians and they mix Black Metal and Post-Rock. What kind of Post-Rock? That’s another term that can describe very different music, from MOGWAI to SIGUR RÓS, so, without hazarding disparate connections, I only say that their music is not conventional in the Metal tradition but common enough if you look at the experimentations in the Black Metal fields over the last fifteen, twenty years. "Winter" is the title of their fifth full-length, again for the Italian label Code666 Records. Five albums, in addiction to the debut EP "Ancient Sorrow" and two splits, are a remarkable figure after eleven years. The previous album "Carrion Skies" has been praised to be their more personal work, considering that AGALLOCH was more than a reference point in the first years of their career. "Winter" is another step for the creation of their own sound. All the tracks are very long, about ten minutes or much more. Different parts come in succession, evoking feelings of melancholy and contemplation; a strong psychedelic essence is always the hot topic, with changes of rhythm and dynamics. The endless arpeggios performed by The Watcher (guitar and vocals) are a steady technique on every song, in a way that sometimes reminds of OPETH. "Winter" has been conceived as unique piece, a long journey through six chapters / songs. Nevertheless, I would recommend ‘II (Penance)’ and ‘VI (Sight)’ as best tracks. The production by Jaime Gómez Arellano is just perfect, every instrument is noticeable and well mixed with a lot of reverberation, and the evocative cover artwork is conform to the opted for style. Concluding, FEN are not my cup of tea, but "Winter" is a professional work that can surely give pleasure to different ears than mine, or simplier, to fans of AGALLOCH, ALCEST, ALTAR OF PLAGUES and the likes. More informations at www.facebook.com/fenofficial and www.code666.net