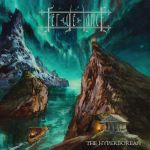 When the intro ‘Auroa Borealis’ gets going, I first started to think, if I accidentally had put on an IRON MAIDEN album, instead of the debut full length from Chicago’s own FER DE LANCE, and then the intro goes into a track titled ‘Mariner’… FER DE LANCE kicked the door open to my little world in 2020, when they released the EP “Collosus” on Cruz Del Sur Music. Four tracks of epic Heavy Metal, old school, hooking, melodic and with killer vocals. A release that came very close to enter my top ten of that year. Now we are writing 2022 and the band is ready with their first full length. I hadn’t really been following track of what the band had been up to lately, so this release came as a surprise for me, a good one though. The guys haven’t lost their flair for epic old school Heavy Metal, on top of that skeleton, they’ve added a good deal of traditional Doom, which lifts the material to a new dimension. The record is a rollercoaster ride of epic sound spheres, hooking melodies, melancholic Doom, darkness and melancholia, all weaved quite well together. Just take ‘Sirens’ a great track, which takes me right back to when CANDLEMASS ruled the world, all down to the vocal performance, great track. The track before, the dark ‘Ad Bestias’ in its Heavy Metal glory even incorporates a great melodic guitar lead, with a small dash of Scandinavian Black / Death Metal antics over it. Vocal wise the EP was more straight on for my taste, the vocals on “Colossus” had more of an edge, which I guess might have turned some away from the music. The vocals back then had more vibrato compared to now, the vocals are still great and delivered with great weight and conviction and are quite varied this time around. On top of the vocals, there is a lot of choir work in the choruses, and I’ve always been a sucker for such! This a great release, catchy and epic Heavy Metal, dark and hooking Doom, darker tracks like the already mentioned ‘Ad Bestias’ and ‘Arctic Winds’, which also is cloaked in a dark and haunting atmosphere, and the powerful quite dry sounding kicking double bass drums do really good, together with the higher pitched vocal, I’m a fan! Enter the doomed planet: www.facebook.com/ferdelancemetal, www.facebook.com/cruzdelsurmusic