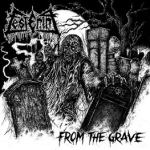 If you judge this release just by its artwork and band name, you could easily be on the wrong trace. Song titles like ‘Festering’, ‘Exhumed’, ‘Proliferation Of Infected Leucocytes’ and ‘Psychi Convulsions Of Neurasthenia’ might let you think of some notorious pathology freaks that wanna pay tribute to the “Symphonies Of Sickness“. But “From The Grave“ is far away from being such a gory orgy. You’ll get 10 tracks of pure old skull Death Metal with that typical riffing and buzzsaw sounds. Sunlight / Stockholm anyone? But before buying that album in order to expect another heir to the throne of mighty DISMEMBER, you should give it a listen first. In other words, on this platter of splatter you’ll get nothing new or innovative at all. Don’t get me wrong; I really hate so called "musical progression". That kind of Death Metal has to be raw, filthy and aggressive, spiced with some nice melodies / harmonies here and there. All these selling points are included on “From The Grave“ too, but it simply doesn’t give me the badly needed kick in the teeth. You’ll get some nice soli once in a while, but all in all it’s kinda mediocre and clumsy when it comes to the musical skills and songwriting in general. In addition, their vocalist is a bit too monotous in my humble opinion and wouldn’t stand the test of time. But that’s just a matter of taste. It’s not bad, but it would be way better to incorporate some screams or at least vary the way of growling, to keep it more interesting. I’m pretty sure the next album will be way better, if these 4 dudes would improve on the mentioned negative aspects. First of all they should get rid of that awful drum sound! Still not sure if it’s a drum computer or just a shitty recording. When it comes to HM 2 Death Metal from southern Europe, I stick to bands like GRAVEYARD, PROFANAL, UNCONSECRATED or maybe FUNEST, just to name a few. Anyway, tracks like ‘Submerged To Emptiness’ and ‘Ascent Of The Blessed’ are quite enjoyable though and even the artwork created by César Valladares (ANATOMIA, ASPHYX, GRAVEYARD a.o.) is really well done. Only for the die hards that feel the urge to collect everything Swedish sounding. All others should just wait for their first full-length hopefully rising up someday soon, since “From The Grave“ is merely some sort of compilation including their demo “From The Grave“ and their EP “Exhumed“ both being released back in 2012. www.festeringpt.blogspot.pt, www.cavernaabismal.com