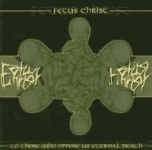 FETUS CHRIST
To Those Who Oppose Us Eternal Death
(self-financed)
34:30min

It should be pretty obvious to everyone reading this, that a band with the moniker FETUS CHRIST not necessarily plays the nicest music around. And when the members furthermore call themselves “Eddi Guts”, “I-Gore The Butcher”, “Hairless Johnson”, “Fat Fruitpie” and “Skinny Leg Fag” it is quite clear that they don’t take themselves too serious either. Well, “Skinny” has left the band by now and got replaced by (hairless) “El Mutante”… FETUS CHRIST are hailing from the south part of Germany and have been around for a little less than two years now. Their CD “To Those Who Oppose Us Eternal Death” is their first musical sign of life and features nine (plus one hidden) tracks of early CARCASS inspired grinding Gore / Death. Vocally “Eddi Guts” and “I-Gore The Butcher” always vary between deep grunted guttural and raw aggressive vocals, which is another similarity to the UK legend. But when it comes to the overall songwriting FETUS CHRIST are still a little different though, as they are not always playing in the blasting direction. It’s actually more riff oriented type of stuff, probably based a little bit on old Death / Thrash Metal as well. A decent production and simple yet effective packaging complete the picture. Now it’s up to you to decide whether you’re a worshipper of stuff like this or not. All further info you’ll certainly get from: FETUS CHRIST, c/o Thomas Böhm, Marconistr. 10, 86179 Augsburg, Germany, internet: www.fetus-christ.de