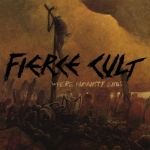 FIERCE CULT from Madrid in Spain were already active since 2007 under their old moniker THE SEED, so it is no surprise that the material on “Where Humanity Ends” sounds pretty matured. Somewhere between Death, Thrash and Groove Metal the guys found their own style and ‘The Beginning’ is a pretty good opener with groovy thrashy guitars, vocals between grunts and screams and pretty technical influences. All influences are balanced pretty well and fans of groovy stuff with a thrashy and partly industrial note should dig the material immediately. ‘One Shot, One Death’ somehow sounds like a mixture between SLAYER, MACHINE HEAD and maybe MESHUGGAH, which is not negative at all, but only as indication for the taken direction. A good doze of groovy Death Metal as fundament really makes the material quite enjoyable as the instrumentation is pretty good and damn technical. Bass and drums really kick ass over the presented eleven tracks and especially when they slow down a bit, they sound like mighty CROWBAR, a band I pretty much enjoy every now and then. Vocalwise sometimes it sounds like Phil Anselmo is striking back again, so if you like the groovy side of Metal with a good mixture of the mentioned styles, FIERCE CULT really is worth to be checked out as a pretty hopeful newcomer. For more info check one of the following sources: www.fiercecult.com, www.facebook.com/fiercecult