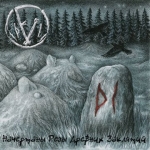 With the first album of FIMBULVINTER from Saint Petersburg, Russia, we have a good example for an overhasty and therefore unimportant release. Well, “overhasty” is maybe the wrong term for a band active for seven years now, but the Pagan Black Metal we hear on “Начертаны Резы Древних Заклятий” leads to a conclusion like this. The songs are too often random in melodies, harmonies and riffing. Nearly anything sounds somehow second hand and too familiar. The folk inspired guitars are not really exciting, yet improvable, the rather thin production makes the basic songs lack of real vigour and the vocals are mostly so typical for Black Metal it isn’t even funny. Too bad, since Pagan Black Metal with Russian influence sounds promising, but on their first release, FIMBULVINTER aren’t keeping promises. But in case the band is able to keep a steady line-up and gets a better and tighter production, the possible next album might become a lot better. The approach of songs like ‘Воронов Стаи’, for example, isn’t that bad. Until then, keep an eye on FIMBULVINTER at: www.facebook.com/fimbulvinterofficialrus or http://fimbulvinterofficial.bandcamp.com. And check out their label at: www.satanath.com/sodp