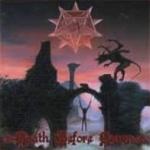 Just in case you have little children at home, here is the perfect release to familiarize them with Black Metal in the funniest way. Don’t worry, "Death Before Dawns" is a totally harmless album, from the cute cover artwork to the no less cute music on the CD. Imagine CRADLE OF FILTH revisited by Walt Disney, and you will get a fair idea of FINNUGOR’s music. By the way, this is a Finnish-Hungarian project (the two nations having a lot in common, their language for instance comes from the same source, this could explain this unusual combination). Gabriel Wolf (the Hungarian) handles the Gothic parts of the album, while his cohort Nikolai Stalhammar (yes, hammar) brings forth the Black Metal touches. Well, I am not convinced by the result. Some tracks are dominated by keyboards which sound like Fisher Price ones, hilarious! The desired effect (grandiose, macabre and romantic atmospheres) is then utterly ruined. The Black Metal songs are no less crappy, the voice (which evokes a sort of bad tempered Donald Duck) is completely buried under layers of badly executed riffs. In this context, I don’t understand why cult vocalist Attila Csihar lost his way in such a bad record, maybe he is a close friend of Gabriel Wolf after all… anyway his performance on ‘Cosmic Nest Of Decay’ (entirely sung in Hungarian) could be labelled as pitiful. Like I said this record could please children because of its comical aspects, and the prettiness of the keyboards parts. Grown-ups should stay away from this mess.