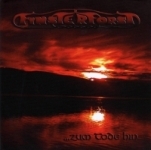 Of all the Pagan releases which I’ve reviewed during the last 2 years there had been one debut that more than just impressed me and I was really looking forward how the German Pagan Metal newcomer FINSTERFORST have developed since the release of their debut “Weltenkraft”. The first major difference to the follow up “… Zum Tode Hin” is the reduced amount of songs. All 5 songs are exceeding the 10 minutes barrier and even if songs with a playing time of almost 22 minutes are not really common in the Metal scene is the final track ‘Untergang’ worth every single minute (a fact which is easily applicable for the whole album) and exactly the kind of song which needs to be called a perfect Pagan hymn. The song starts with a beautiful acoustic guitar introduction which seems to be inspired by the Finnish Folk heroes TENHI before the normal instruments are joining the Pagan ride. What makes the FINSTERFORST music so unique is the use of the accordion not as additional instrument for a single song and part but as an equal instrument next to guitar, drums and vocals. And the musicians are in the position to give this instrument the required space to fully prosper and ‘Untergang’ is summarising the band’s full potential and brings “… Zum Tode Hin” to a remarkable and memorable climax. But not all songs are strictly following this scheme and the mid section of the album is offering two less aggressive songs which are going more in the Heathen Metal direction. I’m still astonished by this release because I was nearly sure that this Black Forest horde would never reach the quality level of their great debut, so I can only bow my head to give credit to FINSTERFORST which are proving once more that Thor’s Hammer can only be handled properly by his rightful descendants. www.einheit-produktionen.de, www.finsterforst.de