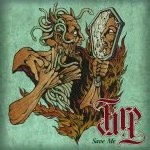 The Hamburg based newcomers FIRE are by far not classical newbies. First of all, they already started in 2003, yet it took them twelve years to record and release some music. I even saw them live ages ago, supporting VOLBEAT in Hamburg, but nearly forgot about it until I looked through my concert photos the other day. On the other hand, the band members weren’t whippersnappers any longer at the band’s foundation. Guitar player Schrörg for example already played in MEGACE and before that in XANDRIL, who released a few demo tapes in the mid 1980s. Thus we have experienced musicians who know exactly what they want: Playing their own, original music. And this music on their first release, a two song vinyl 7”, can only be described with the beautiful German word “kauzig”, which means odd, quaint or dotty. It is often used to positively describe the style of bands like MANILLA ROAD or CIRITH UNGOL, who play old fashioned Heavy Metal with a huge influence of (mainly) Rock music from the 1970s. Aforementioned bands are the best reference to describe the unique sound of FIRE, even though the German four piece doesn’t sound like them. It’s the same idea of creating a style of Metal they want to listen to themselves. The A-side ‘Save Me’ has a decent ACCEPT touch in the beginning, maybe due to the way Klamsi sings here, but speeds up in a very special, quite epic way, just to end up with a jazzy kind of jam. This one is a song that should be a feast for those who love unique and fine Metal. On the B-side we find the great and also unique ‘The King Is Dead’, a song title that somehow reminds of MANILLA ROAD, who might be the best possible comparison anyway to describe this semi-ballad with an epic chorus and a few moments where the guitars even remind me of post Punk. Of course I know that this kind of old school Metal with many, somehow confusing influences is not everybody’s cup of tea. FIRE is a band for those of you who sometimes like their Metal old fashioned and unique and do not fear one or another unexpected idea. And if you’re one of those, you’ll surely like this 7” as much as me. But be quick, only 333 copies were made, so be sure to get your copy. Contact the band at: fire@dragon-productions.com or visit them at www.facebook.com/firehamburg or fire666.bandcamp.com