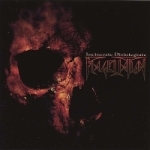 "The future sound of pain" is here… Well, if you believe enough that particular bold statement in question that is to be found from the Swedish FLAGELLATION’s own Myspace – site, then maybe you can somehow bear that pain because it’s all sweet pain that this Swedish sextet offers to its listener. FLAGELLATION’s new 4-song EP (added with a nicely bombastic intro) is actually a real enjoyment to listen to. I mean, the band cleverly combines elements from technical Thrash Metal with the brutality of Death Metal – and even succeeds to spice their whole delicious and massive cake with some of those blackish ingredients that should appeal even to fans of DIMMU BORGIR. The first song, ‘Chaos In The Flesh’, is pure modern Death Metal of the highest class, and undoubtedly the fans of KRISIUN, BEHEMOTH, LUCIFERION and the likes, should go crazy over this song. The next song, ‘Threshold To Madness’, is where the band starts showing its other colors, too, as far as more extreme genre of Metal is concerned. In ‘Threshold To Madness’ all this ‘technical-Thrash-Metal-meets-brutality-of-Death-Metal-meets-symphonic-Black-Metal’ – combination becomes even clearer in FLAGELLATION’s epic and intense sound which I personally happen to love in them mostly. The next two songs, ‘Purified By Fire’ and ‘Incinerate Disintegrate’, are the ones that offer their strongest DIMMU – vibes. Even all the vocalism being presented in these two numbers, remind very much of Shagrath’s vicious snarls in DIMMU BORGIR – and you don’t have to play deaf (or dumb) in order to recognize, and to make an unbiased comparison to them. The last song on the EP, ‘Vast Desolation’, is actually a bit over one minute long instrumental outro which fits well to end this EP due to its all beautiful harmonies that it manages to capture inside. But to conclude this review, it’s not any over-statement to say this is seriously a great stuff, and if you want to enjoy your extreme Metal with a welcomed amount of variation and innovation, FLEGELLATION offers a somewhat perfect alternative for that. What another fantastic band from Sweden again! The Swedes just never stop surprising us, do they? Band: www.flagellation.net, label: www.lastentertainment.com