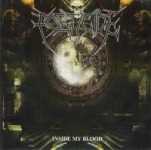 Reading the bandname FOETICIDE you might guess that this Mexican outfit is another Death Metal band in the gory and blasting Death Metal style many US Death Metal bands offer us today. No, you are wrong, that’s not the case as FOETICIDE offer us pretty tight and melodic Death Metal with hints of old DARK TRANQUILLITY and old IN FLAMES when talking about the guitar work. The guitarists seem to be highly influenced by those Swedish masters and I think it’s not the worst way to go. The guys play highly melodic yet very cruel and fast Death Metal with fast forward catchy riffs from time to time even achieving Thrash Metal spheres. Besides that the vocalist works from time to time with great vocal effects which fit them well! Really good stuff here. This is already FOETICIDE’s third album and their best if you ask me and you can easily recognize that we are not talking about newcomers here (the band was already formed back in 1992). “Inside My Blood” offers 11 songs in a playing time of 50 minutes, a great production and as bonus a second CD including their “Early Years Of Rage 1992 – 2008”, which includes the re-recording of old songs from the demo “Life And Death” from 1995, from the demo “Putrefact Corpse” from 1993, 2 songs from their first full-length “The End Of The Beginning” (1998) and the demo “Nightmare Of Dreams” from IMPURE SURGERY (pre-FOETICIDE) from 1990 – and as we are talking about a re-recording here the sound quality is very good, too (though not as great as on the main CD). Check ’em out at www.myspace.com/foeticide or at the labels address at www.omeyocanprods.com.