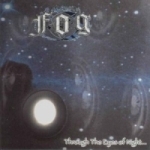 FOG
Through The Eyes Of The Night... Winged They Come
(WWIII Music / Mercenary Musik)
59:30min

Some true Norwegian Black Metal from the USA! FOG are supposed to appeal to fans of MAYHEM, EMPEROR and CRADLE OF FILTH and although this seems to be comparing tea with coffee, there is some truth in it! MAYHEM stands for pure, raw Black Metal and this is the first impression you get by listening to FOG. But the structure and the epic scale of FOG’s songs will strongly remind you of EMPEROR. There is only one big difference: except for the intro and outro, FOG almost completely banned keyboards and such electronic devices from their debut album! Still it sounds a lot like EMPEROR! This means that the musicians have to be quite good as they have to compensate this circumstance: and they are good indeed! The production even allows your ears to locate the bass player as well (remember: this is a Black Metal album!) and he definitely doesn’t have to hide behind his fellow musicians. What about the CRADLE… comparisons? Well, there are some spoken passages that have a similar rhythm to the work of Sarah Jezebel Deva (spoken by a man, though) but I can’t spot any other parallels at all. No more comparisons now! FOG managed to record a very Norwegian album in the epic vein, yet without keyboards. This one is evil, it has great songs and it features good musicians (ex-members of MORPHEUS DESCENDS). Additionally, you get epic Black Metal without keyboards which is not very usual at the moment and quite some people might be grateful for this. So if you already bought the new DIMMU BORGIR album, there is no excuse for not buying this one next time.