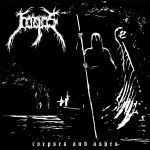 FOGOS from Barcelona bursts onto the scene with their debut full-length “Corpses And Ashes”. Though formed back in 2021, the group is not made up of newbies and the experience will be felt throughout as its musicians have acquired during their time in bands like BLAZEMTH, ERED, OBSIDIAN KINGDOM, AVGRUM or ERIAL. The Butcher on bass, Croma Lan Ro on drums, Kerberos on guitars and Saten Haz Im Nu on vocals, surely gathered to transmit their influence from the 90s and played pure Black Metal in the Nordic style, that is cold and gloomy, abrasive and fast. That also means the uncompromising, aggressive, razor-sharp sensation we get while listening to DARKTHRONE, GORGOROTH, DARK FUNERAL and MARDUK. As mentioned earlier, the experience of the group members will be felt from the very beginning of this record, as each song is arranged and played with intent, so is the atmosphere which reeks of damnation. From its initials ‘Acheron’, ‘Keres’ or ‘Dysnomia’ you will get a cruder and crushing first part, whereas the second part of the record comes with more personal and epic senses, like ‘Mortis’, ‘Eidolon’, ‘Nyx’, ‘Exis’ or ‘Deimos’. Despite being close to 50 minutes long, the whole record comes without any frills and the combinational force of guitars, bass, drums and voice can blow anyone unprepared. Certainly, the recording and mixing of the album by revered Javi Felez (Moontower Studio, Barcelona) have contributed to its engrossing and enticing atmosphere, which has always been the strength of the classic second-wave style. The record is out independently by the band and the concept behind the music, lyrics, and artwork is nihilism and fatalism, using pagan culture as a metaphor. And surely the forces of FOGOS successfully captured that into their raw and direct Black Metal approach. Here in their debut FOGOS did not invent anything, but with their uncompromising approach and playability, get ready to face one of the best Black Metal albums made in 2022. To find out more about the band, please visit www.facebook.com/fogos.official, or https://fogosofficial.bandcamp.com.