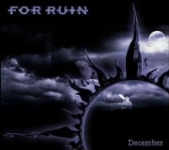 This band comes from Cork (Eire) and this is their first full-length. FOR RUIN was at first a one-man band project, but mercifully this developed up to become a proper act with a full line-up. “December” comes out as very good surprise among the legions of bands / projects / solo things that flood the market right now, no thanks to the present Myspace / Youtube / iPod madness. The musical style of the band is rather difficult to pinpoint, or more exactly it is rather difficult to not give a wrong impression while describing it. Let’s say that FOR RUIN play a melodic form of Death Metal not that much estranged from what was the norm in Sweden more than ten years ago, but at the same time these Irish know how to sound fresh and original. Each track is based upon melodic riffs repeated numerous times with variations of rhythm; also the band knows how to start a song with a strong intro, a rare talent for sure. The overall is based around melancholia (but not sadness, no despondency in sight here, fortunately). My major criticism is raised by the production which lack depth, the guitar sound too trebly and acidic for comfort; on the other hand though, the drum parts are very natural, human sounding, a nice change from the cybernetic arrangements and studio tricks current these days. While FOR RUIN are an Irish band, don’t expect folkloric influences you can find in CRUACHAN or on some PRIMORDIAL material. The band is about melodic Death Metal like I said, and they have found their own niche, but sound less convincing while sounding like too much Gothenburg oriented (like on ‘Demon’ where they sound much too close of “Reflections” – era CENTINEX) a trap they should avoid next time to come up with a 100% perfect record. For the moment, FOR RUIN deserve all your attention and is a band to watch closely. www.forruin.com and the now usual myspace link should give you extra bits of info.

FOR RUIN - by Nathan Shapiro