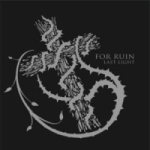 Bands who make heavy use of melody are in a precarious position. Either they succeed at winning over scores of fans, or they fail miserably and re-enforce the long held notion that a band with melody is a wimpy band. It seems that only a handful of such adventurous bands, like UNANIMATED at AT THE GATES, received near universal applause for their efforts. For this Irish band, FOR RUIN, their success has yet to be determined, but their latest album is as good an indication as any that they may yet prevail where other bands have failed, and miserably failed at that. Although reasons invariably differ from person to person, the general consensus on heavy melodies is that they detract from the savageness of an album, and direct the songs in a self-pitying direction utterly unsuited for extreme Metal. However, with a scene so awash in miserably untalented copy cat acts, it’s easy to forget that Metal and melody are practically bedfellows. A melody doesn’t have to be brutal to be beautiful or dark. FOR RUIN have plenty of brutality to spare, but they also allow their songs some breathing space, and rather than make the record wimp out, this practice has resulted in a grand achievement of heavy songwriting. Give them a chance. www.forruin.com, www.myspace.com/forruinband

FOR RUIN - December - by Edouard Vergriete

FOR RUIN - by Nathan Shapiro