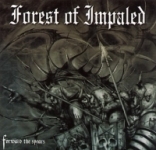 After a MCD and the solid debut album “Demonvoid” in 1999 Chicago-based Black / Deathers FOREST OF IMPALED finally manage to deliver their second infernal assault and a progress from the debut is obvious. In terms of production, song writing and musical diversity the band took a big step forward and offers ten tracks of original, skilfully performed blackened Death Metal that has the right amount of heaviness, melody and sheer aggression inevitably for this genre. One thing that speaks particular in favour for FOREST OF IMPALED is that they did not took much influence from the sufficiently copied Scandinavian style, but created their own definition of “Black / Death” incorporating loads of Thrash and Death Metal inspired parts. The vocals consist predominantly of mid-range screams, which are interrupted by some brutal growls here and there. Tempo variations occur in almost every song and keep the whole CD interesting and full of surprising “twist and turns”. FOREST OF IMPALED’s newest effort is well-done, convincing Black / Death that is not too melodic yet not too harsh to be just an underground thing. It definitely tops most of the releases this overflowed genre has seen this year and is a serious alternative to all that middleclass crap that lacks of dark feeling and hatefulness. “Forward The Spears” is not calculated quality MARDUK produces, but individual sounding stuff coming from the heart! Check out songs like the opener, ‘Sons Of Cain’ or ‘Death I Have Become Thee’ and you will get my point… I hope. Visit www.forestofimpaled.com for more info, maybe they even have MP3, I haven’t checked it myself. The label can be found here: www.redstream.org.