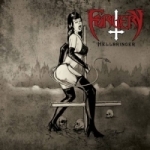 After looking at FORGERY’s MySpace page (who have now changed their name to HELLBRINGER, but since the release is under the name FORGERY, that’s what I’m going to call them…sorry if it’s confusing!), I was amazed that not once did they list SLAYER as their heaviest influence. Hell, I was even more surprised that they hadn’t even listed SLAYER as an influence! This debut release from the 3 piece Australian Thrashers (consisting of Luke Bennett on bass / vocals, Tim Sheppard on guitar and Josh Bennett on drums) is clearly influenced by the "Show No Mercy" / "Hell Awaits" era SLAYER – a Tom Araya signature scream is in there! – which is no bad thing! FORGERY’s guitar sound is very crunchy, like that of early SLAYER, METALLICA, EXODUS and the other Thrash bands of that glory period and they capture that 80s Tthrash vibe excellently, particularly on tracks such as the title track ‘Hellbringer’. FORGERY prove equally adept at slowing things down and have some very cool chugging riffs, as seen in ‘The Rapture’, that’ll have heads banging across seedy clubs all over Australia. The wild, chaotic solo on this track is awesome and is one of the main reasons that ‘The Rapture’ is my favorite track on the CD, along with the killer KREATOR influenced ‘Spawns Of The Void’. FORGERY don’t provide much in the way of originality but they capture the energy and vibe of early Thrash perfectly. If you love your Thrash raw and old school, then definitely check out this release from FORGERY and get ready to mosh like it’s 1984! For more on FORGERY (now HELLBRINGER) check out www.myspace.com/hellbringeraus