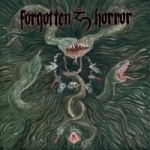 As some of you may know already, FORGOTTEN HORROR is a creation of Tuomas Karhunen; the guy who who plays guitar in Finnish Death / Thrash Metal band DEATHCHAIN under an alias name Cult. Having also Corpse and Kassara from DEATHCHAIN to complete the line-up of FORGOTTEN HORROR, the band is ready to give us its first venomous and lethal bite, which is the guys’ debut studio full-length record called "The Serpent Creation". If these 3 fellows’ main band DEATCHAIN has more focused on the Death / Thrash Metal thing, FORGOTTEN HORROR leans on blackened Death Metal – and makes their best out of it. And how good is this record then, I hear you asking curiously? Well, it’s not only good but much more. Even saying it’s great, or awesome – or whatever in hell, sounds somewhat dull, like leaving me on the ground like a helpless maggot getting burned slowly to death under a hard sunshine. Musically however, it gotta be said that they do remind me a great deal of some Swedish greats that once kept their torches raised high in the air for a melodic and shamelessly catchy Black / Death Metal. I mean bands like early DISSECTION, NALGFAR, NECROPHOBIC and bands with a similar ink. FORGOTTEN HORROR has much of the same in them like the bands I just listed in here – and damn, they do their own thing frighteningly well, spitting heaps of tasteful venom against us in this lecherous orgy of marvelously executed blackened Death Metal. The songs – 8 all in all, are equally strong when getting compared to each other. A constant blitzkrieg of sharp riffs, cleverly thought out passages between hard-boiled heaviness and ripping brutality – and occasional melody sections being thrown here and there, Tuomas’ vile vocal attacks (that quite remind of vocalist Sluti666 of IMPNAZ) and stuff, they all create such a combination of sheer enjoyment here that one could kill for. "The Serpent Creation" is seriously one of those blackened Death Metal albums that most of us will eventually find to spend some quality time with, enjoying it ’til the moment you realize your wrists are fully open and bleeding – and life has started slowly withering away from you. Nah, don’t be silly. Just enjoy the heck out of this record as I did – it’s actually a much wiser decision to do. www.forgottenhorror.com