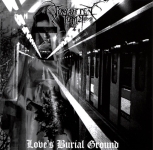 This is already the third full length of this Italian outfit, and their second one for the French label Adipocere Records. Until now, I knew only the band because of the buzz surrounding them within the deepest levels of the underground, so I was eager to hear their music. Well, I am certainly not disappointed! I cannot establish points of comparison with their previous records, so I can’t judge the FORGOTTEN TOMB evolution since their inception in 1999. Let’s say that this horde led by founding member Herr Morbid practice a form of dark and depressive Black Metal mixed with various influences, especially Doom Metal and bleak atmospheric stuff. But don’t think FORGOTTEN TOMB are exclusively interested by slow motion music, even if the overall pacing of the album stays in the slow zone. Herr Morbid’s voice is of the shrieking kind, but not as screeching as the vocals of Wrest and Malefic (from LEVIATHAN and XASTHUR respectively, two bands sharing a lot in common with FORGOTTEN TOMB, especially concept wise). I expected a music far more distressing emotionally than what I found on this disc, let’s say the prominent vibe induce melancholia rather than suicidal urge, for the better I think. Of course, “Love’s Burial Ground” is not an album about the prettiness of life, the band seem to have heavily conceptualized their lyrics (more on that soon on their own website). I would like to especially note the excellent production on this record, expect a crystal clear sound which emphasizes the grandeur of each of the songs (mostly very long ones by the way). Some ambient intermezzos are composed and performed by Nordvargr from MZ 412 (a dark ambient project from Sweden) and add to the doom and gloom of the whole. Sometimes, only the Herr Morbid voice ties the music with proper Black Metal, even if the songs always offer parts which frankly belong to the genre (the beginning of ‘Kill Life’, ‘Forgotten Tomb MMIII’ – pure Black Metal cult this one – and the title track for example). Be forewarned that you will not get an instant replenishing access to the FORGOTTEN TOMB music, because it demands to take time to fully appreciate it, but rest assured these musicians know how to keep the listener’s attention. “Love’s Burial Ground” is an ambitious album which offers a great and varied listening experience. Strongly recommended in my camp. At last something different, unusual, and well executed (call that the Italian touch!) Get info at: www.forgottentomb.com.