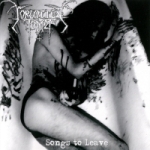 Amidst all sorts of infernally blasphemous sonic artillery comes the suicidal Black / Doom Metal from Milano, Italy of the one-man project (these days at least) Forgotten Tomb. ‘Entombed By Winter’ starts off with acoustic guitar picking after which a horribly morbid and slow riff sets in… Pure slow and oppressive blackness spread through the room as Herr Morbid’s heavily distorted vocals (à la Burzum’s "Filosofem", which is not the only similarity with that particular album) recount of inner bleakness and agony. Sparse keyboard use, various samples and bleak, downcast speech weave a black tapestry of despair. ‘Solitude Ways’ explores more melodic terrain and the doom influences become more apparent here (old Anathema and Katatonia’s "Dance Of December Souls" are sensible points of reference). Vocal torture is the ‘regular’ scream here, without distortion or other trickery. A tasteful guitar lead forms the bridge to a slightly more ‘up-tempo’ part of that song (relatively speaking of course) which is a killer piece of doomy Black Metal. I must say that Herr Morbid has done quite a job in giving this CD the appropriate ‘large’ sound; guitars are very much in the front, combined with sparse soundscapes dispersed through the music gives the record a very ‘layered’ feel (another similarity to "Filosofem"). Production is thus well-balanced; often this detracts from raw Black Metal but it suits this record well. The third song, ‘Steal My Corpse’ has lengthy parts of fast-paced Black Metal. Herr Morbid pulls it off well, but it does not really suit the spirit of the music which is, according to the bio, ‘a monument of real-life agony and despair’. Perhaps he should put these ideas into his Black Metal side-project Gaszimmer, which is, as the man stresses himself, not a politically-inspired moniker but one sprung from hatred for *all* of humanity. The album ends with two other lengthy pieces of slightly melodic, layered music as we heard on track two. The lyrics to "Songs To Leave" are more depressive, longing for death, exalting the misery of our short and fleshly existence on this earth, thus aptly accompanying the music. To wrap it all up, this album is a varied piece of doomy Black Metal, moving through different terrains ranging from, say old Burzum to old Katatonia but clearly with its own identity. I am glad to hear the same particular mediterranean melodic sense in Forgotten Tomb (the same sense that makes Monumentum, old Varathron and Rotting Christ or Opera IX stand apart from other bands) and thus, this release comes recommended to basically anyone who is charmed by the three words ‘Black’, ‘Doom’ and ‘Metal’.