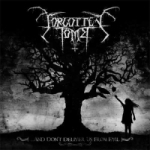 Italian blackened Doomsters FORGOTTEN TOMB made a relatively indelible impression on me on their previous album, titled "Under Saturn Retrograde". I remember referring them to bands like old KATATONIA, HYPOCRISY, Finland’s RAPTURE and the likes. There was something very intriguing yet dynamic on the "Under Saturn Retrograde" record that sort of provided me an option to follow the band’s future endeavors with a bit closer ear. The band’s 6th album in order, "…And Don’t Deliver Us From Evil", continues to color the band’s murky yet atmospheric horizon with basically the same colors that made their previous record such an enjoyable journey for my ears. Even if the band’s previous guitarist Razor SK ain’t a part of the FORGOTTEN TOMB league anymore (his place was taken by a guy using a short alias A.; also in a Black’n’Roll band called WHISKEY RITUAL), the band has still maintained a similar musical style and vision that they performed on "Under Saturn Retrograde" already. Doomy, dragging riffs and heavy-handed and groovy tempos added with weeping melodies, very audible bass sound and somewhat effective, raw and black-ish vocal patters provided by Herr Morbid, are some of the true trademarks of theirs on this album – and what’s even better, this stuff really tends to go under skin too. A song called ‘Let’s Torture Each Other’ sends some shivers down my neck for its creepy and twisted rhythms and naturally the song’s chorus part, which openly suggests us to torture each other. Wonderful, isn’t it? The album’s strongest asset, however, is its indisputable dynamics and the whole strength how the songs are carried through to the very end. There’s no fillers here, and each song has equally deserved its own spot on this record as a part of this strong and solid wholeness. Again, great work from this Italian bunch. Band contact: www.myspace.com/darknessinstereo, label contact: www.agoniarecords.com