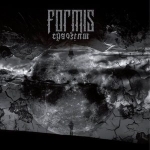 Polish act FORMIS plays Death / Thrash Metal. Since this one is a really wide sub genre, I was not exactly sure of what to expect from "Chaozium", the band’s third and most recent album. I haven’t heard their previous albums, so I don’t have a comparison point. But this album right here has an overall epic and dark atmosphere to it. There are enough fast parts to satisfy the speed freaks, but FORMIS excels in the mid paced and slow parts. I can hear some mid-era BATHORY and EMPEROR influences, which add a different perspective to the band’s style, since you can also find other influences such as (Sweden’s) NAGLFAR, MASTER and up to a certain point, DEATH. The production is razor sharp and sounds late 90s right away. And although it has really nice dynamics, it also lacks bottom end. A heavier production may have helped to bring the album to another level, in my humble opinion. The mix is well balanced and not so compressed. Also, I think that Marek’s vocals need to be more present. His performance is great. Sebastian and Hubert do come up with solid riffs and melodic lines. Jacek’s bass lines intertwine nicely with the guitars. Rafal’s drum work is flawless. These guys do know how to play their instruments. Some songs are more varied than others. But that doesn’t subtract anything from the listening experience. This is a solid album made by seasoned musicians. Recommended! You can support the band here: www.facebook.com/formismetal. And get their album here: www.defensemerch.com