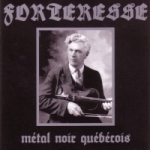 After reading the promo-sheet I was quite curious, because the band emphasizes their Canadian heritage, or to be more specific, the tradition of Québéc. So what would it sound like? Something like all those Scandinavian bands with their so-called Viking influences? Or something completely different? Well, the specific Canadian aspect runs out in the lyrics, done in the French language and a few acoustic guitar parts, some kind of folk-inspired music. On the one hand a little strange and definitely not the music I want to hear on a Black Metal release, but otherwise those folk parts are just a few interludes / intros, regarding the whole playing time they are not carrying weight. After disposing this special aspect, we are getting now to the actually core of this album. And that is – admirable Black Metal! Mostly played fast, each song got a quite long running time, where the same riffs and melodies are repeated again and again, interrupted by some short breaks just in time before it is getting boring. The cold atmosphere is underlined by the desperate, screaming vocals, which may be a little too much in the background, the instruments are much louder. But I personally like this kind of sound, since for me vocals are not the most relevant part, at least not in all cases. This first release by FORTERESSE reminded me, above all other influences, of ENSLAVED’s masterpiece “Vikingligr Veldi”, in particular the cold atmosphere combined with the blurred melodies. Interestingly FORTERESSE wanted to bring an answer to the Scandinavian Black Metal, but if you are subtracting the few folk parts and the French lyrics, you will get exact this – typical Scandinavian Black Metal. So FORTERESSE do not reinvent Black Metal, but with a fine output like “Métal Noir Québécois” there is no need for doing so. www.myspace.com/forteresse