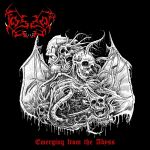 I am not quite sure what are decisive reasons for re-releasing albums, EPs, demos etc. I suppose it’s more or less someone’s personal idea with which he comes up due to whatever reasons, presents it to a friend and decides by the means of his or her reaction if the idea is brilliant or not. Sometimes when you may have taken some pills of Tilidine and drank a few beers to it, you can get to the sensation that whatever music you listen to right now might be the best thing ever happened to mankind. And if you are in a position to organize a re-release of this amazing moment, why wouldn’t you go for it? Could be one possibility how the guys from Memento Mori choose the 1994 one and only release “Emerging From The Abyss” of FOSSOR from northern Spain. Another one could be that sound engineer Dan Lowndes, singer and guitarist from CRUCIAMENTUM and IMINDAIN, owns a sound studio called Resonance Sound Studio and has a weakness for good old school Death Metal. And maybe one day his Spanish friend and drummer of CRUCIAMENTUM Jordi, told him about the old scene in Spain and what was important back then. They listen to that stuff get hazy and next thing you know is Memento Mori releasing the demo from 1994 again, remastered by Dan Lowndes, with a new cover and to be officially released on July 24, 2017. FOSSOR is nothing but old school Death at its finest. Brutal, heavy, doomed and full of hate. It’s quite a nice mix of all the known ingredients. And what I love is that old school Death Metal in many ways is pretty refreshing for me since I am too young to know what the developments in this time, this specific area and this kind of Death Metal are. From my point it’s usually something new and different to what I personally listen to in Death Metal nowadays. For example, the fact that this record contains one song with the length of six minutes is something special in Death Metal from the early nighties I think. But FOSSOR really nailed it to combine that claim of creating something huge and still handle the simple condiments to structure the songs with flow and diversity. Something specially the Spanish scene is capable of, thinking of GRAVEYARD or MORBID FLESH and maybe also TEITANBLOOD. All new stuff but still working with the same styles. Lots of time and space to fill but they mange it with dedication and creative powers. Why FOSSOR brought out just that one demo, I don’t know. With such a first release the Death Metal world could have been yours. Nevertheless “Emerging From The Abyss” was definitely worth to be re-released. It’s a huge and all-around complex record. A lot of fun for old school heads and young ones too. Check: www.memento-mori.es