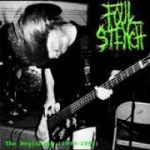 Pinch your nose, the smell of hell wafts from deep below the earth’s crust. FOUL STENCH, the appropriately named band in question, got their start in the early 90s, a golden age to all serious Death Metal fans. Like their bigger, hairier brothers PUNGENT STENCH, REPULSION and SKELETAL EARTH, FOUL STENCH played a sort of Grind / Death fusion with such strangely upbeat time signatures, one could almost visualize PRIMUS doing the same if they were so inclined. The guitars are heavily distorted, as is Grindcore’s wont, the drums a steady Jazz beat, and the vocals a NAPALM DEATH roar. A recipe for some success, to be sure, but some listeners may find themselves annoyed; for FOUL STENCH do sometimes sound like they’re pissing about. The FOUL STENCH sound only got better with time. By the third demo, the guitar tone had grown even heavier and more bristley. The songwriting itself remained relatively unchanged. Hopefully with their return, FOUL STENCH will prove that they too haven’t allowed the years to dull their senses. www.myspace.com/foulstench, adp.areadeath.net/en