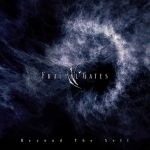 FRACTAL GATES
Beyond The Self
(Great Dane Records)
50:36min

French Metal act FRACTAL GATES surely quite often gets attention for themselves for their very Gothenburg-ish melo-Death sound; employing cleverly exactly those elements within their sound that once made bands like IN FLAMES, DARK TRANQUILLITY, AMON AMARTH, etc., such winning concepts among the Metalheads worldwide. Add also some small doses from the Finnish Kalevala Metallers AMORPHIS’ debut album "The Karelian Isthmus" into the same cauldron, just to get some more vicious spices brought out from this soup – and you pretty much have FRACTAL GATES’ 2nd album, "Beyond The Self", that even doesn’t even try to hide any of those aforementioned ingredients anywhere. In the end of the day, however, "Beyond The Self" is actually a darn enjoyable yet entertaining release all in all, harking back to the early 90s when some noteworthy Scandinavian Death Metal albums were released. In this sense, FRACTAL GATES hits the jackpot, no doubts. Then there’s of course the other side of the coin: does this album find its buyers because one can always go back to such records as "The Karelian Isthmus", "The Gallery", "Once Sent From The Golden Hall" and so on, if he / she wants to. That’s probably the question that remains to be answered by each of us. "Beyond The Self" offers a nice nostalgia trip back to the first wave of both Swedish (85%) and Finnish (15%) Death Metal basically – and that’s about it, I guess. If that’s something that may re-flame your candle again, then by all means welcome FRACTAL GATES in as they do just about enough justice for that concept on their 2nd full-length. www.fractalgates.bandcamp.com, www.greatdanerecs.com