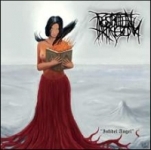 The name of the band almost prepares one for what is to be contained within. An icy piece of melodic Black / Death Metal from Finland. This, being their third album of this four piece band. The awful cover art that goes along is not actually matching what the band is capable of. First, they have a somewhat atmospheric approach, although there is a subtle use of keyboards, they deliver it by using layers of riffs upon riffs, and using a mid-tempo approach to a good extent. Blessed by a heavy guitar tone sound, the band is also using different vocal styles, from the more common high-pitched Black Metal screams to lower, deeper Death Metal grunts. Overall the music has a lot of sense of melody, which is encompassed by very well played guitar solos. And while they also use quite some different forms of speed in their music, they tend to lose a bit of power while going very fast, with the drum rythms sometimes sounding a bit sloopy and loose, not bad played per se, but in my eyes, not choosing the best way to come up with a fast and interesting drum pattern. Some of the material offered in here reminded me to a more evil version of the early CHILDREN OF BODOM albums, with some touches similar to DISSECTION and also some bits that can recall bands like EDGE OF SANITY and NAGLFAR. On ‘Infidel Angel’ there is a superior guitar solo, which raises the quality of the song alone. Yet, after a few listening there are a bit of details that can be improved. The fast parts, specially the grind-like drumming at times sound a bit forced… the guitars have some thrashy edge that seems that is looking for that thrashy drumming but it never realizes like that, and that could have easily added a lot more power than what the band usually chooses, like ‘Under Shadows Of The Sword’ where the fantastic riff-o-rama recalls for a homage to a SLAYER kind of drumming (that is even reached at times on the song, proving that they can actually do it right). So, if they decide to show up-front their evil Thrash sound with their atmospheric Death / Black Metal sound, adding to it the great guitar abilities shown, they can come up with a massive monster of an album. As it is, a very good album, but I can sense they can give more. www.myspace.com/frostbittenkingdomofficial, www.nosignoflife.com