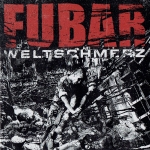 FUBAR is a Grindcore band from the south of the Netherlands, that built a solid reputation in the underground through more than fifteen years, releasing two albums ("Justification Of Criminal Behavior", 2004, and "Lead Us To War", 2012) and sharing an bunch of split EPs with names as TOTAL FUCKING DESTRUCTION, SPLITTER, EMBALMING THEATRE, LYCANTROPHY, MAKTA TERESA, CATHETER and the likes. Over these record collaborations, they also made a great experience on many European stages, like Obscene Extreme Fest or Bloodshed Fest. Luc Favié, the singer, also run the renown Doomstar Booking, so we’re not talking about some bedroom’s nerdy musicians but people very active in the scene. According to their promotional announcement, "Weltschmerz" is a German word that means world-weariness, and it’s the title of their third album, first partnership with F.D.A. Records, a label that is mainly focused on traditional Death Metal but which sometimes propose different stuff like KEITZER or IRON BASTARD. Fourteen tracks for a bit more than half hour, the perfect length to display rage and social condemnation in the form of fast music, and looking at the cover artwork there aren’t misinterpretations. Grindcore classic acts like NASUM and BRUTAL TRUTH are the fundamental stones at the base of their sound, and pioneers of the melodic Crust / Hardcore as TRAGEDY, HIS HERO IS GONE, FROM ASHES RISE and WOLFBRIGADE are there in the mix. After the introductive instrumental title-track, from which the theme will be reprised in the concluding track ‘Void’, ‘Exhaustion’ is the real start of the game, where FUBAR succeed to hit the nail on the road, without innovations, just by spot-on riffs and a collective good performance. The most brutal riffs, for example in ‘Consumed’, ‘Forsaken’ or in ‘Shadows’, set off against the massive melodic tone of this album. Maybe, I’m not saying anything wrong if the songwriting often reminds me of MARDUK or IMPALED NAZARENE when blast beat and tremolo picking are the law. The Hardcore background often comes out, for example in ‘Dead’, with Luc’s vocal style and the backing vocals that, using a large range of their voice, it can be very varying and never monotonous. "Weltschmerz" is so, more than another step of the FUBAR’s production: concerning the influences, it’s not really different than the previous releases but it’s a confirmation of their qualities rendered to the top level helped by a very professional production, so I think this is really their best material so far. I would never suggest FUBAR to an uncompromising Grind / Crust maniac who pukes on every modern band similar to PIG DESTROYER or TRAGEDY, but more open-minded listeners can easily enjoy "Weltschmerz", so go to www.facebook.com/fubargrindcore to get in touch with them and take a look at the F.D.A. Records webstore at www.fda-records.com.