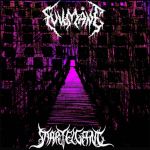 The year starts off with a split by these two, quite new entities. FULLMÅNE, a Norwegian one man band, and MARTELGANG from the Netherlands, and yet one of these secret bands that disclose the members. Both bands are kicking Black Metal in our face, showing two quite different approaches to the genre. One delivers a quite classic take on the first to the second wave of Black Metal and the other grim Noise-Industrial simplistic lo-fi Black Metal. Let’s do a little mindtrick. We already know that DARKTHRONE was heavily inspired by BATHORY when they commenced on their Black Metal path. Though what if BATHORY emerged after the Second Wave Of Black Metal and became heavily inspired by that and DARKTHRONE, then you’ll have FULLMÅNE. Raw, semi-melodic Black Metal with heavy doses of the mentioned bands, both musically and with the vocals. It is not all bad musically, though have been heard quite a lot before, and the dots aren’t really connected throughout the two tracks on here. I like the vocals, especially because it reminds me a lot of Quorthon during the epochs of BATHORY. Though I miss some intensity and darkness, and a tad better songwriting and playing skills, before this will kick me about. MARTELGANG is dark and eerie, noisy landscapes of doom and despair, and a vocal smeared in reverb. Though I miss some musicality and something hooking, it is a tad intense, due to the disturbing noise, though the raw and lo-fi production and lacking mixing skills, take away some of the intensity. A lot of the elements drown in one major sound, like the beat on ‘Dominion’, and that is, perhaps, a shame, hard to tell, when the all you hear is the beat and vocals. It could perhaps become interesting with time, though it needs a tad of work to latch onto me. The mix is decent on the last of the three tracks ‘Contemptuous’ by the mighty NAPALM DEATH from good old “Utopia Banished”. As a big NAPALM DEATH fan, I can see where MARTELGANG wants to go here, though I don’t really feel the industrial cold post-apocalyptic intense atmosphere, as the Brits create on the original track, on the cover version here. Well, all beginnings are hard, some tougher than others. Both bands here do show a little hope, though as the music is on this release, I don’t deem it ready for release, though the release might be looked upon as a legendary ‘demo’ split in 20 years time. Enter the twillight zone: www.facebook.com/fullfukingmoon, www.facebook.com/martelgang