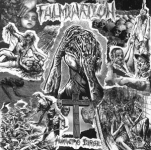 FULMINATION is one of the three cult bands of the Dalarna triumvirate (UNCANNY, INTERMENT, FULMINATION), and after the cult box of their town mates UNCANNY, now it’s the turn of FULMINATION: all their unreleased material has been waxed in a patinated quality double vinyl. The case of FULMINATION has been a strange one and common to many other Swedish minor acts. UNCANNY were more or less known in the circuit back then, having a couple of solid releases out (the UNCANNY / ANCIENT RITES split LP ’93 and the "Splenium For Nyktophobia" LP ’94) whilst FULMINATION were almost unknown to the public (no releases at all besides a bunch of demos and a split CD in 1994 "VVAA Live Från Musikhuset"). A case similar to that of SARCASM from Uppsala, a band which had a LP ("The Fading Illusions") recorded in the heydays, but that never saw the light of day. The platter was recorded in 1994, too late in time as it was a year when Death Metal was really dead and labels had no interest at all in the death wagon anymore. It’s a real pity, if you ask me, as these dödsters were purveyors of real catchy tunes, having the classic trademark of Avesta Death Metal, one of the most intense and brutal of the whole Sverige panorama. If you like the vibe of the "Splenium For Nyktophobia" LP, this is definitely for you! The resemblance between UNCANNY and FULMINATION is not a coincidence at all. Mats Forsell and Fredrik Norrman (who put their footprints on KATATONIA too) were former members of both bands and Johan Jansson (INTERMENT’s mastermind) was everywhere too. This release (The Crypt demo series) contains a lot of interesting stuff. Besides the above mentioned unreleased LP, it has all the demos of the 1992 – 93 era ("Demo ’92", "Through Fire" Demo ’92, "Promo ’93") and the now legendary "Live Från Musikhuset", a four tracker recorded live at the unfamous Från Musikhuset, a studio attended by almost all Dalarna döds youngsters (S.G.R. , INTERMENT, UNCURBED, GREEDKICK, PEXILATED, UNCANNY). To me these last tunes are the most catching ones, more intense, greeding and in your face. Best tracks: ‘The Seducer’ and ‘Pain Inflictor’. Mind you, I’m not fooling you, saying all these 26 tracks are top-notch but I support one-hundred percent the idea of Ted Tringo, the boss of The Crypt label, to publish full-catalogues of bands, also those minor excerpts that not have the same quality level or production of the main releases. Following this concept, Ted is going to reprint some previous released platters (like UTUMNO) this time putting out the full catalogue. Get these twenty-six tunes and start stage diving, now! The 2-CD edition will be handled by Dark Decent Records. More info at www.darksymphonies.com/thecrypt, www.darkdescentrecords.com