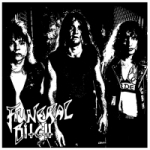 The digging in the legacy of Metal is deep these years, a lot of obscure and hard to get releases are being reissued in different formats again and again, and often that’s a joy for people like me, who loves to dig into the history of bands and the music I love. This time around we have gotten the demos from the shortlived Paul Speckmann band FUNERAL BITCH, that started out as ASSAULT, without releasing anything under that moniker as far as I know, and then went on to release two demos as FUNERAL BITCH before WAR CRY / DEATH STRIKE / MASTER and ABOMINATION took over as Speckmann’s main priorities. This is from the early days of Death Metal, when it still was a crossover infused bastard of darkness, tuned down Speed Metal riffing and a punkish ‘we don’t give a fuck’ attitude, together with noisy guitar leads, pounding double bass drumming and a puked form for growl / scream. Speckmann is on fire on the demos, absolutely amazing vocals and a big noisy bass, eating up the sound picture and creating a wall of demolition, where the guitar is riffing below, besides when it surfaces with a frenzy and crazy lead, awesome. All fans of early Death Metal, Crossover and Swedish Death Metal will enjoy this release more than a lot, really good music for a rainy Danish day and quite an impact on an early Friday morning, some killer music that has been reissued here, props up and more info at: www.blackmassrecords.com 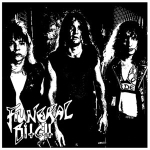 This is for all those who like to dig in the history of extreme Metal. FUNERAL BITCH is a band the one and only Paul Speckmann started in his youth, 1986 to be precise, together with drummer Peter Thomson and guitar player Alex Olvera, who later played bass in ZNÖWHITE. They lasted for two years and as many demos before breaking up in 1988. It seems like FUNERAL BITCH was a side project Paul had, since both MASTER and later ABOMINATION were active in those times as well. But FUNERAL BITCH did not last long enough to become more than a pure underground hopeful, let alone get the chance to record a full album. That’s a pity somehow, since the stuff here is pretty cool and quite unusual for Paul Speckmann’s discography. Of course we find stuff here that reminds of Mr. Speckmann’s better known bands like MASTER or DEATH STRIKE, but these recordings are not pure "Speckmetal" (forgive me for using this term, Paul!). The stuff presented on these two demos also has a distinctive early Crossover edge which reminds of bands like ATTITUDE ADJUSTMENT or CRUMBSUCKERS. And the extremely short songs ‘Mcmac Attack’ and ‘Chest, Breast, Molest’ even have hints of upcoming Grindcore and Noisecore stuff. To forge links to Paul’s later career, I need to tell you that the band anthem ‘Funeral Bitch’ and ‘The Truth’ were re-recorded in slower, less punked up versions for the first MASTER album. But here we find them in their early versions, a lot faster and less complex. "Complexity" and "FUNERAL BITCH" are words like "fire" and "water" anyway, for this stuff is absolutely straight forward, without frills, but a few hinted solos and short songs instead – nine songs in fifteen minutes speak a clear language here. If you love the stuff Mr. Speckmann does, you do right if you check out FUNERAL BITCH, if you dig for gems, you’d do right, too. This compilation of FUNERAL BITCH demos was already released two years ago as a vinyl 7", now Nuctemeron Records re-issued them in a digital format, too, despite the fact that this stuff is more than analogue. More info at: www.myspace.com/realfuneralbitch, www.nuctemeronrex.com