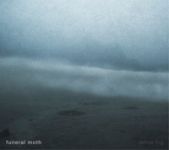 Japanese FUNERAL MOTH plays nearly literally Funeral Doom Metal. While listening to the band’s full-length debut opus, I could constantly hear my heartbeat in the background simply because FUNERAL MOTH’s Doom is soooo ultra-slow – almost reaching a dead-calm musical state, in which once dead are about to put dead again so to speak. I have never heard anything like this utterly dead and slow-motion ‘funeral-ish’ Doom Metal, and this Japanese trio has surely tried their very best to not hurry with their songs anywhere. Overall the main atmosphere on FUNERAL FOG’s debut album "Dense Fog", is simply said, crushingly dead limb-heavy and slower than a 30-centimetres uphill race for snails if I am allowed to use such a clumsy description about this record. At times this stuff can get very enjoyable even (strictly depending on your certain type of mood) but then at some other times I am afraid to say it just gets very boring and tedious. Unfortunately the latter option happened to me personally, so come and shoot me because I really didn’t get into this time time around. Think about it… 4 songs within 73 minutes or so, you certainly do need some nerves and 100% dedication, which I lacked badly. Sorry. More information on FUNERAL MOTH can be found at www.weirdtruth.jp/funeralmoth, label: www.weirdtruth.jp