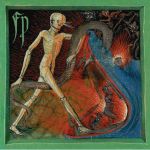 Four years after the debut "The Archer Takes Aim" New York based solo-project FUNEREAL PERSENCE unleashes the follow-up upon the crowd. While the outer form stayed the same, four songs with an overall playing time of 48 minutes, the substance of the music changed a little bit. Norwegian Black Metal still is the main source of inspiration, but this time Matthias "Bestial Devotion" Müller took a step forward. During the first listening session the album could be labeled as some kind of Black and Death Metal mixture DARKTHRONE are known for (of course before and after their purest and blackest stage from "A Blaze In The Northern Sky" up to "Panzerfaust"). So you will find lots of simple, but impressive riffs with blustering drums in the vein of HELLHAMMER and no extensive use of keyboards. Despite the occasional dose of Fuck Off attitude the sound and production are fitting very well. But what makes this album special are all those little and very spare, thus far more remarkable, musical ideas spread over the playing time. A strange guitar solo here, a weird break there, some synthesizer sounds, acoustic guitars, clean singing, spoken words and riffs that make you think more of traditional Heavy Metal than Black or Death Metal. Definitely not a generic Black Metal release. If my information are correct the album is named after a Catholic martyr, who once served in the Roman army and then was beheaded, because he would not renounce his Christian faith. And I guess the cover, seems like like an original drawing some centuries old, shows him. A concept album dealing with a Christian martyr, for sure something different compared to the stereotype topics often used by Black Metal bands. All those having blinders on may move along, while listeners having a stake in artistic creativity can find further information here: www.facebook.com/funereal-presence-2528356320724604, www.sepulchralvoice.de