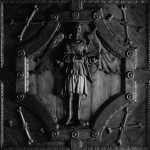 Writing reviews for Voices From The Darkside is always a stimulating experience. The word “funereal” was unknown to me and first I thought it is foolish neologism, combining the words “funeral” and “reality”. But this is not the case, “funereal” is a genuine term, first known use in the year 1725. 282 years later FUNERAL PRESENCE were established by a worshiper of the dark, who calls himself Bestial Devotion. Despite some German terms used the band is located in New York, United States and all and everything is done by Bestial Devotion, a typical one-man Black Metal band. I guess there is no country with so many one-man Black Metal bands like the USA. Four songs, almost 50 minutes playing time, no easy listening stuff ahead. Already after the first impressive tunes of the opener ‘The Tower Falls’ the main source of inspiration rises – EMPEROR. Especially the era of “Anthems To the Welkin At dusk” and “IX Equilibrium”. Having in mind that FUNEREAL PRESENCE is an one-man project the technical approach and the songwriting qualities are really astonishing. Guitar work, rhythm changes, even the vocals differ from grunt / shrieks to clear voices during the track ‘Gestalt’. My absolute favorite song is the instrumental ‘Dämmerlicht’, the same hypnotic mid-tempo drumming mixed with that special Norwegian guitar sound – damn, sounds like ENSLAVED on the “Hordanes Land” mini album, “Vikinglir Veldi” or “Frost”. To sum it up – FUNERAL PRESENCE carry on where EMPEROR and ENSLAVED stopped 20 years ago. The vinyl edition of this fine art of Black Metal is released via Sepulchral Voice Records, but be it LP or CD, “The Archer Takes Aim” is highly recommend for all those who yearn for the atmosphere of Norwegian Black Metal in the early / mid 1990s. www.sepulchralvoice.de, www.theajnaoffensive.com