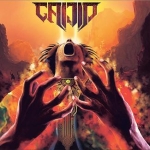 Despite ranking on second place when it comes to the most populous countries, Metal from India still is something exotic. GAIJIN are playing some sort of technical Death Metal, albums like "Symbolic" or "The Sound Of Perseverance" by DEATH obviously have served as inspiration for the trio. Of course GAIJIN did not reach the same level of musicianship, regarding songwriting and instrumental skills. The three tracks sound more like a reduced or simplified version of DEATH. Remarkable is the vocalist, who appears very rarely on the self-titled first output. Most of the time it is instrumental Death Metal. Concerning the sound I would categorize it as good and satisfying demo / rehearsal room sound. Personally I liked this EP, due to the fact that there is constant flow of Death Metal. No idle running, no repetitions, no unusual elements. Just three guys playing Death Metal. www.facebook.com/gaijinofficial, www.transcendingobscurity.com