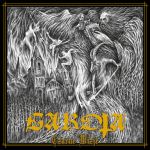 Polish Black Thrash trio GAROTA has released their debut studio album “Czarne Wizje”. This comes right after their first EP “Najstarszy Zawód Swiata”, which was released in 2021. With an album title that translates to ‘Black Visions’, it’s not a surprise to discover that GAROTA is a blackened Thrash Metal outfit. The three-piece go by the names of Asbiel on vocals and guitars, Sid Fetishious on bass and drummer Witchfucker and they play this repugnant style with some enticing punctual streaks of faster old school Hardcore to leave you panting. The hints were well served in their debut EP release and now this album comes right away with an explosive, aggressive and bruising approach that the band is trying to establish. And what spews forth from all the tracks is anything but repulsive, and in 34 minutes the Polish trio unleashes a maelstrom of rage, feral viciousness and raw violence. From the opening with ‘W Oczach Diabla’ (In The Devil’s Eyes), it’s clear that there will be no shortage of feelings of pure evil that classic Black Metal always leaves behind. More in the record, songs such as ‘Prymitywne Rytualy’ (Primitive Rituals), ‘Czarne Wizje Pelne Krwi’ (Black Visions Full Of Blood), ‘Eden Plonie’ (Eden Is Burning), ‘Nad Jeziorem Ognia’ (On The Lake Of Fire) and ‘Oczy Golgoty’ (Golgotha’s Eyes) will leave many things for imagination. GAROTA delivered all in their native language and Asbiel’s snarls seem to have come from the underworld. Simplistic, but effective are the guitars, well executed with the raging intensity of thrashing riffs and evil tremolo riffing. The bassline rages deep with persistence throughout and dynamic percussions are well crafted that blends mid-tempos fantastically with deadly blast beat lashes. “Czarne Wizje” was recorded in May 2022 at Czysciec Studio, Nihil is responsible for the mix and mastering, while Warhead Art is responsible for the grasping cover art. It’s now available via the Polish music label Godz Ov War Productions and recommended for a violent and fresh listening experience, that shall possess the minds of those who adore AURA NOIR, MIDNIGHT, DESTROYER 666 and HELLRIPPER. Find out more about the band and label at www.facebook.com/garotapoland, www.facebook.com/godzovwar