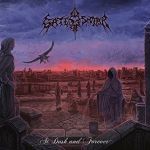 GATES OF ISHTAR came into existence in a realm of heavy-hitters during a very busy time in the Swedish scene. Swedish Death Metal held groups like DISMEMBER, UNLEASHED and ENTOMBED in its ranks; a formidable trio that set the pace during the 90s boom in Sweden. Mix in AT THE GATES’ foray into a heavily melodic strain of Death Metal and IN FLAMES reinforcing the concept throughout the 90s and GATES OF ISHTAR, with a relatively short career, were kind of lost in the chaos, despite releasing a trio of albums that were strong from start to finish. Not pioneers, but not second-wave standard bearers like acts such as SOILWORK, THE HAUNTED or CARNAL FORGE. Initially released in 1998 by Invasion Records, "At Dusk And Forever", the final release in the GATES OF ISHTAR catalogue, is seeing a second wind courtesy of a repressing by Century Media Records nearly two decades later. While competition is supposed to fuel innovation, that particular concept doesn’t always work when applied to the various schools of extreme music. Grindcore, melodic Death Metal, technical Death Metal and Black Metal as a whole have all seen their pioneering innovation undergo massive amounts of replication, leading to over-saturation, meaning that good bands that produce high-caliber material are often stuck trying to exist in a realm of third-tier or otherwise totally average bands. The purity of the idea becomes overworked and formless. Going back to the 1990s and reevaluating the work of GATES OF ISHTAR was overdue. While all the Swedish big names have had their own careers play out over the last two or three decades, many of them are fragments of their original ideas. IN FLAMES have been put out, and have now gone on to make music that is less IN FLAMES and more ‘depressed burn victim’. ENTOMBED have been tied up with legal issues over who has the rights to the band’s ‘brand’, DISMEMBER is a pleasant memory, and so forth. GATES OF ISHTAR’s relatively short career ended up being, in some sense, an unintentional bump to their status in the underground. Three solid releases during the 1990s and then a break-up. There were no dead limbs on the band’s tree, nor did they stick around to try and ride out the storm of internet file-sharing’s rise, commercialization, and style-breaking capitol infusion courtesy of big labels with big bank accounts. So, how well did "At Dusk And Forever" hold up? Quite well. Songs run with the conventional formula of European-flavored melodic Death Metal almost to the letter. The ripping double-guitar attack uses tradition as its main weapon. Rhythm phrases hit hard and help carry the songs like a battering ram, morphing into melodies and double-harmonizations with near seamless delivery. Solos and leads have a pretty clear line of attack, moved into the center of the songs by the vocalist going tacet and the guitars doubling up on rhythm sections. Solos and leads reflect more of a style residing in the camps of traditional Heavy Metal or NWOBHM (or traditional Blues, for the sake of commentary), rather than the unchained hellstorm of something along the lines of the opening solo of SLAYER’s ‘Captor Of Sin’. Drums range anywhere from the down-beat stylings of Speed / Thrash Metal to the hard-charging blastbeats iconic to the Death Metal genre. Songs such as ‘Battles To Come’ and ‘The Burning Sky’ easily win the battle against time, sounding as animated and powerful in 2017 as they did in 1998. Both are stand-out tracks that would serve as a good point of departure for newer fans to explore the album. For older fans, spinning these songs may come as a reminder of how fast and drastic changes in music trends can come. The remastering job has very little substantial effect on the album. There is a noticeable spike in playback volume when compared to the original, but outside of that, the production job on the original release was adequate enough that a great deal of audio wizardry was not required to spruce up the sound. Tower speakers, or audio systems with sub-woofers, are perfect for displaying the dense and punchy bass drums on this record. As a bonus, the new version comes with a ninth track. A cover of ‘Red Hot’ by American Glam Rockers MÖTLEY CRÜE. A welcome addition to an otherwise bonus-less reissue. "At Dusk And Forever" wins the battle against time, remaining a solid listen and a nice piece of the true Swedish melodic Death Metal sound. For more information on GATES OF ISHTAR, check out www.facebook.com/gatesofishtarofficial. The reissue of "At Dusk And Forever" comes courtesy of Century Media Records, located at www.centurymedia.com.