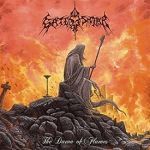 Swedish Black Metal in the 90s was a thing of beauty. DISSECTION was moving the genre forward with a more melodic style with "The Somberlain" (1993) and "Storm Of The Light’s Bane" (1995). And GATES OF ISHTAR were right there following that path. It’s almost as if they picked up right where DISSECTION temporarily left off. Two decades later, we see reissues of their three albums with new cover artwork by the always incredible Juanjo Castellano. Their second full-length "The Dawn Of Flames" encapsulates the atmosphere of mid 90s Black Metal for those who love their Metal atmospheric, melodic and slightly melancholic. ‘Perpetual Dawn (The Arrival Of Eternity – End My Pain)’ begins the masterpiece with somber guitars and slight keyboards before Mikael Sandorf’s despairing and angst-ridden vocals permeate into pure Black Metal bliss. Along with DISSECTION, GATES OF ISHTAR’S style of Black Metal influence stands hand in hand with more melodic acts as DARK TRANQUILLITY, LILITU and in later years, THULCANDRA. ‘Trail Of Tears’ swaggers along with a confidence of epic proportions. ‘Forever Scarred’, with its more old school Black Metal guitars and anguished vocals bring on a solitude and emotional journey transcending waves of emotion, and later, euphoria. Each song is near-perfect in its own way. The tracks easily stand on their own, yet like separated brothers at birth with strong similarities but different personalities. A great album has consistency while not sounding the same. And "The Dawn Of Flames" rises above most albums of its day. ‘Dreamfields’ marches and stomps. ‘Dawn Of Flames’, with its steady guitar / drums rhythm mesmerizes and hypnotizes before striking off in a more upbeat direction. The sixth track ‘Eternal Sin’ is another offering with a wall of sound pushing the vocals to the forefront. Melody and desperation seep their way through our hearts throughout. The final tracks ‘No Time’ and ‘The Embrace Of Winter’ wrap up the epic delivery, not leaving us wanting more, not leaving us with too much, but with just enough mastery of songs to leave us all in an orgasmic flux of total satisfaction. For more GATES OF ISHTAR information, check out www.facebook.com/gatesofishtarofficial, label contact: www.centurymedia.com